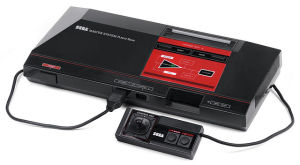 The Master System (マスターシステム Masutā Shisutemu?), often called the Sega Master System or SMS, is an 8-bit third-generation video game console that was manufactured by Sega. It was originally released in 1985 as the Sega Mark III in Japan and then redesigned and redesignated the Master System for release in 1986 in North America, 1987 in Europe and Japan, and 1989 in Brazil. The original Master System could play both cartridges and the credit card-sized "Sega Cards," which retailed for chea...

Alex Kidd in Miracle World (アレックスキッドのミラクルワールド Arekkusu Kiddo no Mirakuru Wārudo?) is a platform game for the 8-bit Sega Master System video game console. It was first released in Japan on Saturday, November 1, 1986, and then was distributed to Europe, Australia and the United States in 1987. It was arguably the most widely known game in the Alex Kidd series, due to it being built into most Master System II consoles. It is the first game in the Alex Kidd series...

Alex Kidd in Shinobi World is a side-scrolling action game produced by Sega that was originally released for the Master System in 1990 and later re-released for the Wii Virtual Console in 2009. Although developed in Japan, it was released exclusively for the overseas market (North America, Europe and Brazil), with the American version being produced in limited quantities. The game stars Alex Kidd in a parody version of Sega's ninja-themed action game Shinobi, where Alex Kidd fights against...
favoritefavoritefavorite ( 1 reviews )

The Addams Family is a platform game based on the 1991 movie of the same name released by Ocean Software in 1992. The game was released for the Sega Mega Drive / Genesis, Super NES, Amiga and Atari ST. Ocean released several other versions of the game for other platforms, featuring different levels and gameplay. One version was released for the Sega Master System, Nintendo Entertainment System and Sega Game Gear, with the latter ported by Acclaim Entertainment. A third title was developed for...

Disney's Aladdin is a series of platformer video games based on the 1992 motion picture of the same name. The series consists of three drastically different games: one developed by Virgin Interactive for the Sega Mega Drive, which was ported to various other formats, another developed by Capcom for the Super Nintendo Entertainment System, which was later ported to the Game Boy Advance, and a final version developed by SIMS for the Sega Master System and Game Gear. This version was developed by...

Alien3 (エイリアン3) is a sidescrolling video game based on the movie of the same name. It was developed by Probe Software and published by Arena Entertainment for the Sega Mega Drive, Sega Master System, Sega Game Gear, Amiga and Commodore 64 in 1992. Different games based on the movie were released on the Super Nintendo Entertainment System and the Game Boy. The player's task in game is to rescue hostages and defeat aliens which have taken over human colonies. There is a set amount of...

Korean title translates to "Baby Dinosaur Dooly". The game is based on a popular Korean cartoon. Music and sprites were changed for a potential (unofficial) Western release by Innovation Technologies but it is thought this version has never appeared outside Korea. Source: SMS Power! http://www.smspower.org/Games/DinosaurDooley-SMS

Aleste (アレスタ?) is a 1988 shoot 'em up video game developed by Compile for the Master System. It is a direct successor to Compile's earlier Zanac, featuring many of the themes and gameplay mechanics of that work. The story of Aleste concerns the manmade supercomputer DIA 51, which has been infected by a hybrid virus that is spreading like wildfire, eventually leading DIA 51 to eliminate the human race. When Yuri, Ray's girlfriend, gets injured in DIA's assault, Raymond Waizen has all the...
favoritefavoritefavoritefavoritefavorite ( 1 reviews ) The Master System (マスターシステム Masutā Shisutemu?), often called the Sega Master System or SMS, is an 8-bit third-generation video game console that was manufactured by Sega. It was originally released in 1985 as the Sega Mark III in Japan and then redesigned and redesignated the Master System for release in 1986 in North America, 1987 in Europe and Japan, and 1989 in Brazil. The original Master System could play both cartridges and the credit card-sized "Sega Cards," which retailed for cheaper prices than cartridges but had lower storage capacity, while later models removed the card slot. The Master System also featured accessories such as a light gun and 3D glasses which were designed to work with a range of specially coded games.

Succeeding the SG-1000, the Master System was released as a direct competitor to the Nintendo Entertainment System in the third generation of video game consoles. The Master System was technically superior to the NES, but failed to overturn Nintendo's significant market share advantage in Japan and North America. However, it attained more success in Europe and Brazil, where it controlled a significant portion of the market share in each region. The hardware of the Master System also served as the base structure of Sega's handheld game console, the Sega Game Gear. Due to Nintendo's licensing practices with third-party developers the Master System's game library lacked a number of quality titles. Final sales estimates show the console selling 13 million units in its lifetime, compared to the 62 million NES units. Retrospective reception to the system gives credit to the system's role in Sega's development of the Sega Genesis, but criticizes its shallow game library.